The history of Botshabelo is one of growth from a place of refuge for Christians in South Africa into an important and influential centre where the Gospel was proclaimed among Black people, where Black and White received education and training and where commerce and industry were practised. Seen against the background of its origins Botshabelo was also a significant centre of German culture. A good many of the people that emerged from here have left their mark on the history of South Africa.

Botshabelo, though now a museum, is still a sanctuary – a sanctuary for those in search of knowledge and for those who wish for a while to escape the hustle and bustle of daily life. We hope that you too will find in Botshabelo a place of refuge to which you will be constantly attracted by its distinctive character.

Botshabelo was established by the missionaries Alexander Merensky and Heinrich Grtzner in 1865. Initially it provided a refuge for Black Christian fugitives, the need for this having arisen from the hostile conduct of the Bapedi chief Sekhukhune who forced the missionaries and their Bapedi converts to seek safety outside of Sekhukhune-land.

Merensky and Grtzner were members of the Berlin Missionary Society, a large and influential body which established and ran numerous mission stations in the Transvaal and other parts of South Africa. The Transvaal was, however, its most prominent mission field.

In 1865 Merensky purchased the farm Boschhoek(now Toevlug) from Jan Abraham Joubert for 500 Prussian Thalers, and here Botshabelo was laid out. To protect themselves against attacks from Sekhukhune, the missionaries and their followers built a fort which was named Fort Wilhelm after the Prussian King Wilhelm I. This fort is now known as Fort Merensky and with its "Mediaeval" tower and walls that project above Botshabelo it is a unique blend of Western and Sotho architecture.

The mission station which developed rapidly and in time became the most important, the largest and the best organised institution within the Berlin Missionary Society - a model mission indeed. It was self-suffient, with its cultivated fields, gardens, wainwright shop, brickyard, bakery, print-shop, mill and store. A German school was also established at the Mission and German Missionaries sent their children there.

Nevertheless the prime significance of Botshabelo lay in its function as a mission station. Shortly after Merensky's arrival, and as early as 1865, a small church (which still stands) was built. A parsonage and other buildings followed. Later on a much larger church, consecrated October of 1873, was erected. For many years this was the largest church building in the Transvaal. This church - the masterpiece of Botshabelo - also stands to this day. A school for the children of baptised Blacks was established in 1873. A training school for catechists and evangelists followed in 1878. In 1906 a seminary for the training of teachers was created while a further primary school building was built in the 1930's and a high school with hostel in 1940.

The halcyon days could not however continue indefinitely and in 1962, due to financial reasons, the Berlin Missionary Society began to withdraw from South Africa.

In April 1971, almost as an omen, the old church bell cracked during a church service. To the black people living there it was a sign from above that their time at Botshabelo had ended. They left a year later to settle at Groblersdal among other places. After more than a hundred years of mission work a silence settled over the buildings, streets, lanes, gardens and fields of Botshabelo. 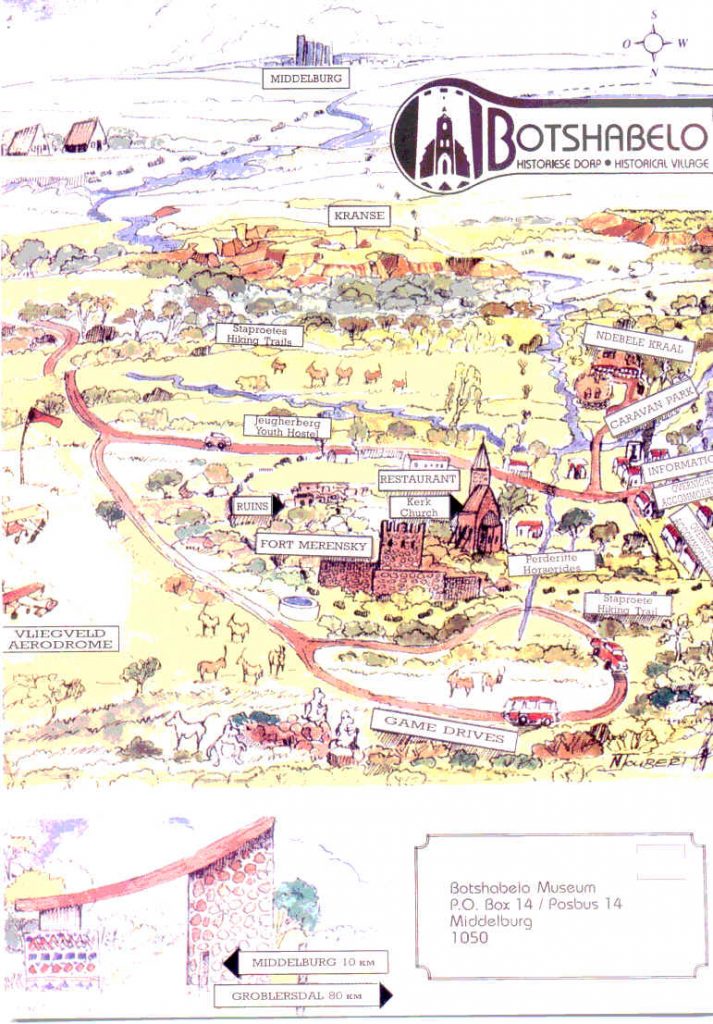 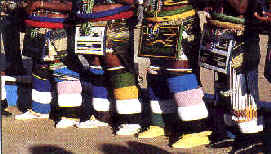 Young girlinitiates wear an impressive arrya of colourful izigolwani, which are beaded hoops worn around legs, arms, the waist and neck. 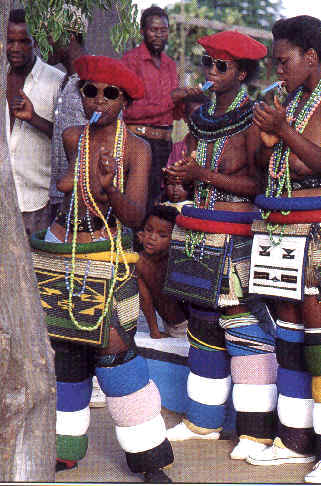 Amaphephetu are the stiff rectangular aprons beaded ingeometric and often three-dimensional patterns which are worn by girl initiates at their "coming-out" ceremony that marks the conclusion of the initiation school in which the girls are kept in isolation and are trained to become homemakers and matriarchs.

Married female quests wearing complimentary blankets and matching berets waiting outside a house of a mother whose son is away at an initiation school or wela. 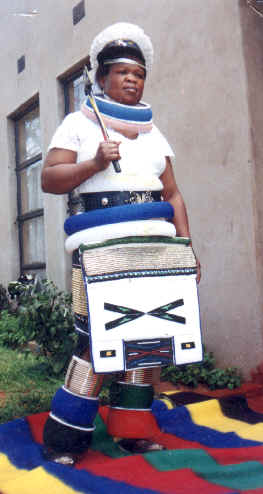 After passing through initiation the beaded front aprons worn by girls give way to stiff square ones, amaphephetu, which are traditionally made from hardene leather and adorned with beadwork.

An ipometi(a corruption of the word 'permit') that dates back to the 1930's. The ipometi is worn by married women durring ceremonial occasions to demonstrate their credentials as a matron of standing in the community. 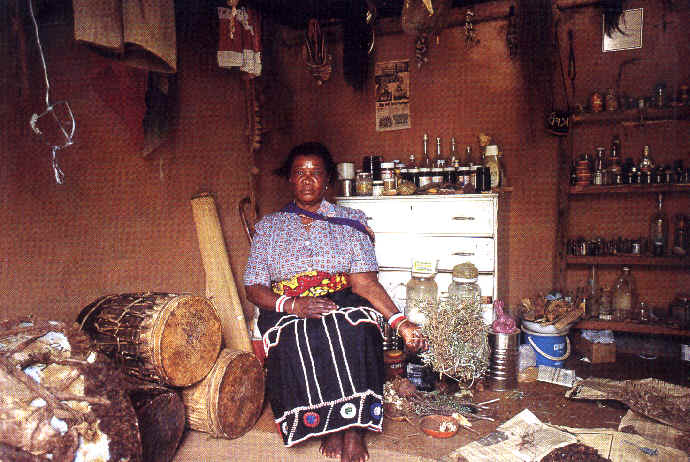 Izangoma, traditional medicine men and women, are important members of Ndebele society. It is believed that  the cause of illness is the action of some extraneous force like a spell or a curse on the patient. The power of the healer lies in his or her ability to deal with that force.

Send us a mail

Contact us via email for any queries about Tourism